Sean’s philosophy on becoming homeless is that “most Americans are just 2 paychecks away from becoming homeless.” With that notion on his mind, Sean fights to give these people he helps everything they need to try and get back on their feet again. Most of the “successful” ones stay on at the shelter as staff and “pay it forward.”

As the Director of a homeless shelter, Sean is no stranger to the effects of drug and alcohol and the hold it has on some of the residents of the shelter. The pain clinics in the area, set up to help people manage chronic pain or detox from drugs such as heroin, are often abused and the staff turn a blind eye to the growing problem. Sean met with local pharmacists and law enforcement to stop the overdoses happening due to the misuse of these clinics and to persecute the staff that was behind it.

Sean’s humanitarian work doesn’t stop in States. When Haiti was devastated by the earthquakes that ravished their already impoverished conditions, Sean put together supplies and flew it over to assist.

For those who need it, download the Cononie Family Foundation Logo. 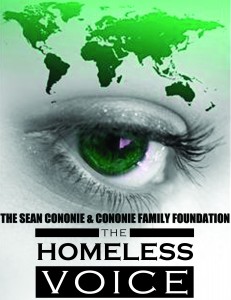