Posted on February 18th, by Sean Cononie in Uncategorized. No Comments 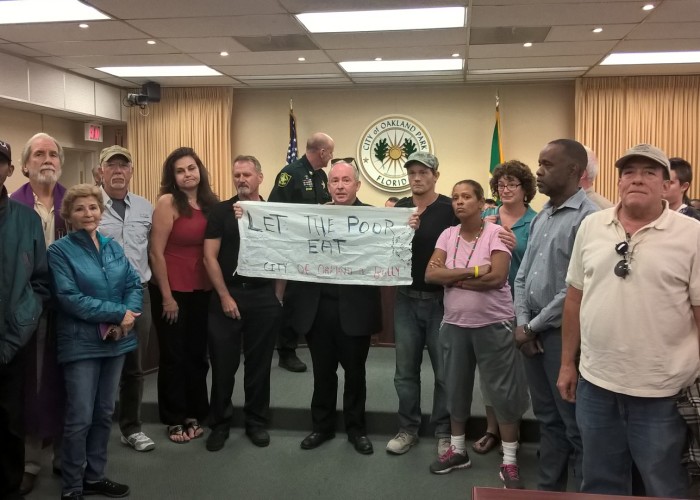 On February 17th 2016 , yes i did say the year 2016, Father Bob from All Saints Mission is being denied the right to do what his Jesus Christ commands him to do in the Book of Mathew. Well actually that same book commands me and others to do the same.

He has continued to use his church to fellowship by breaking bread with the poor of his community. Except him breaking bread gives him a fine daily. This is his first crime feeding the people , his second crime is a little civil disobedience. On this day he and others went to the City of Oakland Park City Commission meeting and gave their public comments and spoke from the heart. The good church leader was last to speak. I was one of the first to speak.

After the heartfelt speech from Father Bob the “good guys” simply left their seats and went to the front of the city commission meeting and blocked the meeting. The mayor got very upset and stopped the meeting. Not just the mayor who was upset by the look of things it appeared that the whole commission was fuming . To think that some group of people could disrupt a city meeting . Well I guess it is no different than the city disrupting feeding the poor.

If you look at the last year this food sharing band is bad across the nation but more goes on than that. Look how cities go on and wipe out tent cities. They destroy the tents of homeless people who just want to live on public land becasue they are homeless. Where else do they live when they do not have a place to lay their head? Do you want them in your backyard? Do you want them in front of your home? No you don’t and they don’t want to either. They pick land that is owned by the people. In case you did not know the homeless are people and it is their land as well. Did I say that some of these homeless people served in our armed forces protecting our freedoms.

Yes we hear helping the vets , everyone wants to help our boys and girls who served but now are homeless. No , I am sorry there is not one city that will open their doors to feed or house a vet. They may claim they do but yet they make laws where it becomes and act of God to serve Gods People.

In America we have three classes of people, the upper, the lower and the middle class. We have now birthed a fourth class here in America titled ” The Unwanted ” these are the poor.
American people hear me out. Most Americans are Two Pay Checks Away from being the ” Unwanted ” what happens when you become homeless? Do you want to be fed ? Do you want to sleep in a bed?

People don’t sit back and watch the last earthly possessions of a homeless person such as their tent be cut and torn apart by the local police becasue the Mayor wanted the homeless gone. I am quite sure that , that police officer wants to fight real crime and not cut the tent where a 70 year old lady used to protect her from the elements while she slept the night before. It is time for all of us to protest and campaign against cities that go after the poor.

Can you imagine American turning its back on our poor and homeless? I got news for you .. you don’t have to imagine it anymore… just turn on the news and  you can see it daily across the USA. Sometimes you can even watch it live.. How sad is that?

PS: Father We got your bail money when they come after you again. It is too funny how the Bible says you will be attacked for doing God’s work. A job well done my Brother , “Go in Peace….” I’m sorry I meant to say “go in Civil Disobedience”